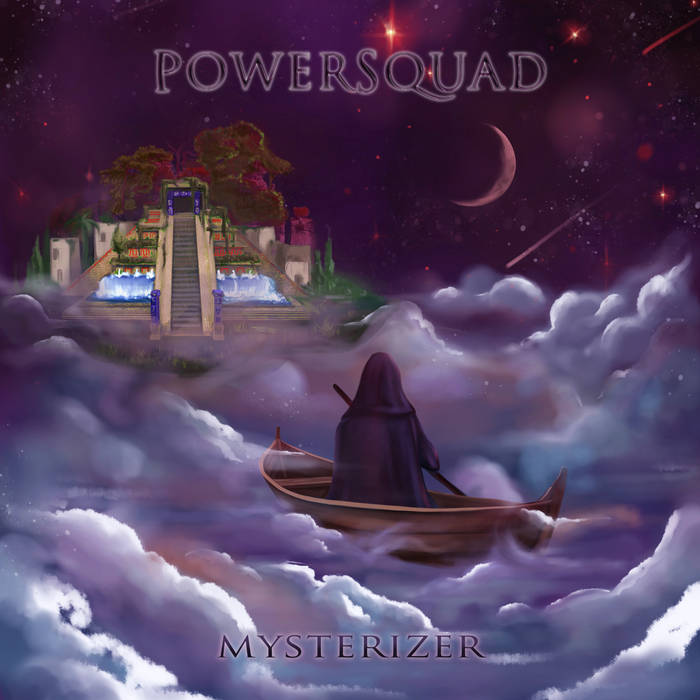 Finally! The fourth Powersquad album is ready to be released.
It took about 4 years to make it happen. At some point, I even thought that it's better to close this project and put all material into the Majesty Of Revival catalog.

I started to figure out with ideas and riffs somewhere in September 2016, after Majesty Of Revival's "Dualism" release. Since we had supporting gigs for Dualism I just collected melodies until December. Later, the first single "Vivid" released with me on vox. But honestly, I wanted someone else to perform vocals on this album, so I started negotiations with several singers but ended up with nothing due to stylistic disagreements. I really wanted to do a good Power Metal album, but put something fresh on it, since most of Power Metal releases of past 10-15 year sounds the same. "Shrine of the Wanderer" was full of experiments and listening to this album now I not that happy with the result, xD
So, I tried to play with drum patterns, riffs and melodies during composing "Mysterizer', but not leaving Prog/Power Metal frames!
Most of 2017 I spent as a session musician in different bands and produced the next MOR album, along with the release of the second Korzo album. Fortunately, I was involved in producing debut Toni Lucifer's album "Mr. Freaky" and meet their bass player Vitalii Popfalushi, who also turned out to be a great vocalist! So we did one song "To The Land", I also commissioned him to write lyrics. And after hearing the result we definitely know that it works out perfectly!
The singer was found, and the next step was the keyboards! I sent a message to Ruslan for keyboard arrangements, but unfortunately, he was busy with lots of stuff and agreed to help me with the one song. So, I decided to record keyboards for the rest of the album by myself. Richard Andersson from Time Requiem/Majestic/Adagio/Space Odyssey sent me a lead preset for good keyboard sound, so I really thankful to him for the addition to this release especially!
A few months later I met keyboard virtuoso Maestone, who plays in MOR nowadays, and he agreed to help me with keys on "Fill The Sky"!
Another story with "Gardens Of Eden". Vladimir Yakubovsky sent me a message at the end of December 2019. I didn't hear from him for a while after his departure from MOR (except for a few meetings in Kyiv). He was asked me to join another band Monumental, so we come together in my studio in January and recorded a ballad "Gardens Of Eden" during the making of debut Monumental album #Purification. It was super exciting to work with him again because this guy is an excellent composer and an old friend of mine!
We finished everything by adding extra vocals by Toni Lucifer's singer Antonio Finchman, who perfectly fits into the overall picture of the album!

So, I had a lot of time to compose and think about all the songs on this opus, along with making a top-notch production. Some tracks like "Fill the Sky", "Return From The Grey" and "Mysterizer" sound really crazy and not typical for the Power Metal genre! But I tried to put something fresh, not just standard "verse-chorus-verse-chorus" pattern. I hope you'll enjoy this one!
I also attached lyrics for each song, so you can read and get inspired while listening.
Stay safe and take care!
Dimi/

Composed, arranged by Dimitriy Pavlovskiy in collaboration with Vitalii Popfalushi, except:
"Gardens of Eden" by Vladimir Yakubovsky
"Cold" by Sonata Arctica

Founded in 2011 by Ukrainian virtuoso Dimitriy Pavlovskiy, mastermind of Majesty of Revival.

Bandcamp Daily  your guide to the world of Bandcamp